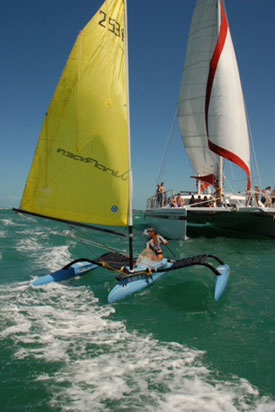 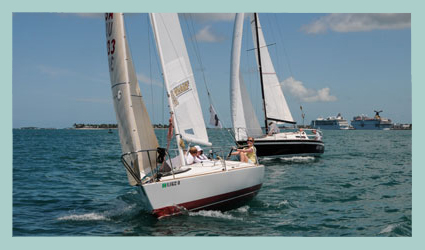 Ahoy Mates! It’s time to clean the bottom and pile on the sails.

This all-in-fun race series recalls the tradition of the wreckers in the Key West of the 1800’s. Vessels laden with rich cargoes from Gulf and Caribbean ports often became victims of storm and the unmarked reefs off Key West.

The first wrecker to reach the site had the responsibility to save the passengers and crew—but they also won the right to salvage the cargoes. Some historians have written that it was not unusual for 20 or 30 boats to race to a wreck.

The Captains’ Meetings are held in the Sail Loft at Schooner Wharf at 7:00 p.m. the Saturday before each race. Captains enjoy complimentary Pusser’s Rum punch while reviewing race procedures.

The Awards Ceremony & Party is held at 7:00 p.m. on Sunday, race day. Captains & crew can see themselves under sail while viewing film footage taken of the race by the official race committee boat. The popular Big Daddy Rich will be playing Rock, Soul, Blues, Country, Rare 1 Hit Wonders and AM Gold from the 60s and 70s all with fun and energy.

Trophies and prizes are earned by the top 3 vessels in 6 to 7 different classes –schooner, multi-hull, classic, monohull 29′ and under, monohull 30-39 feet, monohull 40 feet and possibly a Hobie Cat class!

At the race start Key West harbor is a magnificent sight, filled with colorful sails and spinnakers on vessels ranging from 16 feet to 120 feet.

This original nautical event is another creation of Schooner Wharf Bar owners, Evalena and Paul Worthington, and is enjoyed by visiting yachters, local private boats and Key West charter vessels. You don’t need a boat of your own to participate, book passage and crew on one of the charter boats in the Wreckers’ fleet.

The Race Course is 7 miles from Key West Harbor to Sand Key. Race starts are: 1:00 PM and 1:05 PM for up to seven different classes. Wrecks rarely occurred in good weather, but the Schooner Wharf Wrecker’s Cup Races are conducted SAFETY FIRST. Stand by on #68 if severe weather is forecast. The Captains’ Meetings are held in the Sail Loft at Schooner Wharf Bar at 7:00 PM the evening before the race. The Award Party & Ceremony is held at 7:00 PM on Race Day. Awards in each race will include Original Trophies, Pusser Rum & Goodies, Schooner Wharf Bar Tabs and Wrecker’s Race Tee Shirts.