The Key West Historic Seaport was honored on May 18, 2018 in recognition of Meritorious Performance in the field of Organizational Achievement at the 2018 Florida Preservation Conference hosted by the Florida Trust for Historic Preservation. 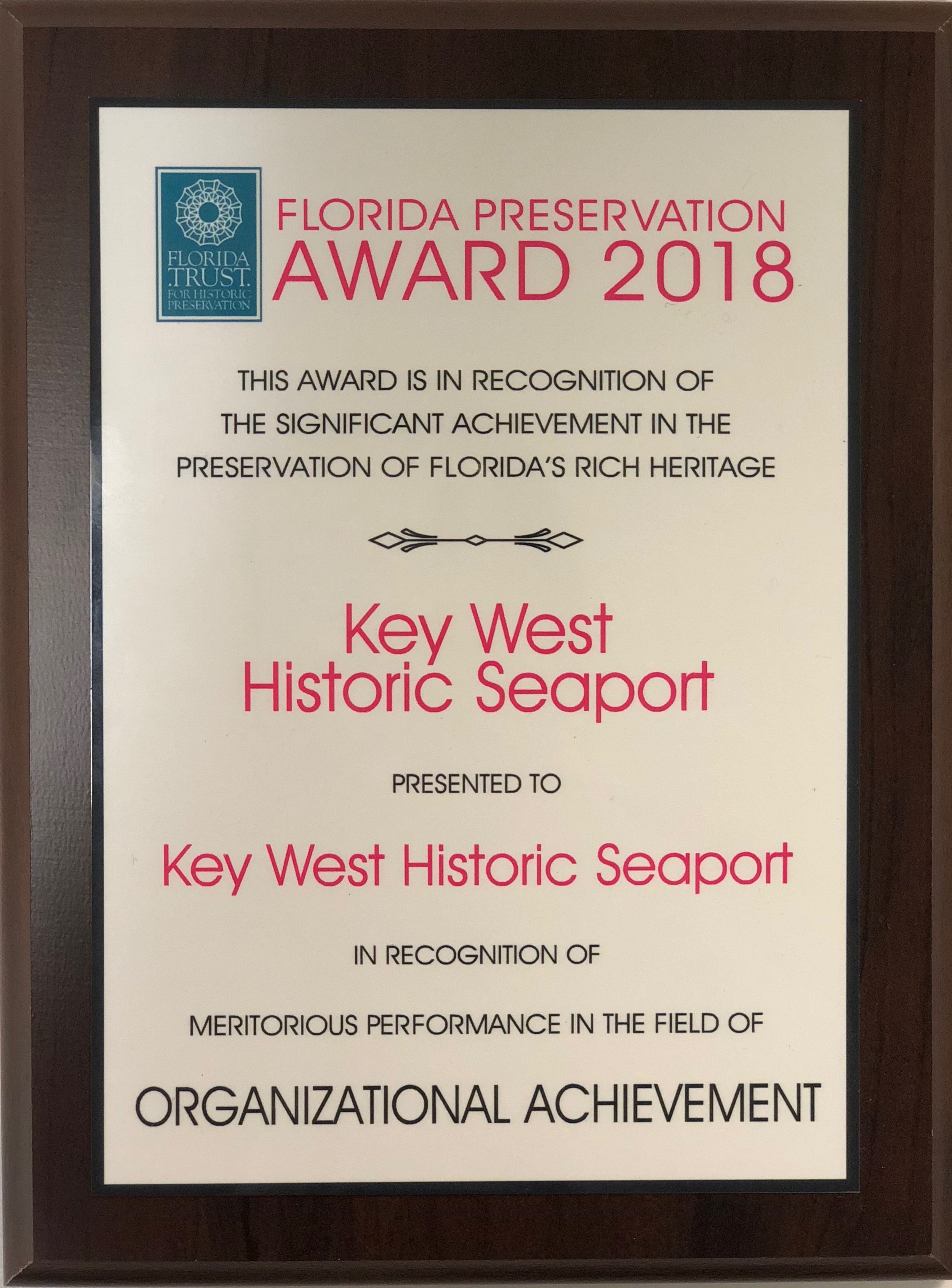 The Florida Trust for Historic Preservation was founded in 1978 and is Florida’s nonprofit dedicated to protecting the state’s architectural, historical and archaeological heritage. With a strong focus on advocacy, education and stewardship, the Florida Trust serves as a steward for historic properties throughout Florida and has saved a number of unique and historic state treasures.

The Florida Preservation Awards recognizes individuals, organizations, businesses and agencies that have made a significant impact in preserving Florida’s history. Award categories range from Infill Design and Green Buildings to Archaeology and Preservation Education/Media.

The award is in recognition of the significant achievement in the preservation of Florida’s rich heritage. The City of Key West and the duly appointed Bight Management District Board oversees the preservation and protection of the history and character of the Key West Historic Seaport. The Historic Seaport has supported many industries vital to the economy and overall way of life in the Florida Keys and Key West for more than 200 years. From fishing to tourism, nearly 100 businesses and organizations rely on the Historic Seaport to support their families and livelihood today.

THE ROOTS OF WHERE THE HISTORIC SEAPORT BEGAN!

Get an authentic Key West experience strolling the harborwalk waterfront at the Historic Seaport. What has been a global maritime trade base for the last 200 years is now also home to many of Key West’s finest destinations with something to offer for people of all ages. At Key West’s Historic Seaport you will find restaurants offering some of the freshest seafood on the island, one of a kind bars, unique boutiques and art galleries, engaging museums highlighting Key West’s history, fantastic hotels and the departure point for various boating and watersports excursions.

MAKE YOUR VISIT TO KEY WEST A HISTORIC ONE!

THE START OF THE SEAPORT

Thus, by the late 1700’s, sea captains found that the uninhabited island of Key West (which was also known by the Spanish name “Cayo Hueso”) was a useful stopping point during coastwise navigation. It had a safe anchorage, and there were stocks of drinkable water at primitive wells ashore.

In addition, there was a great abundance and diversity of marine life in the Keys waters. The early mariners and the first settlers of the island soon came to rely on such resources for subsistence and as part of the economic base of the town when it first became established in the 1820’s. That tradition continued on into the present day.

The Historic Seaport was formerly referred to as Key West Bight. A bight is a curve or recess in a coastline, river, or other geographical feature. It can also be a loop of rope, as distinct from the rope’s ends. In this case, both are fitting, but due to the seaports rich settlement and fishing history it was aptly renamed the Historic Seaport. 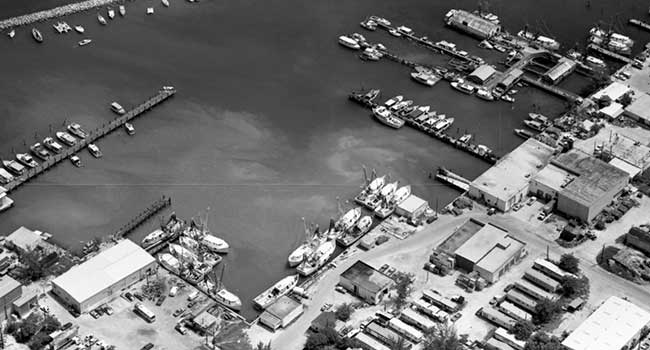 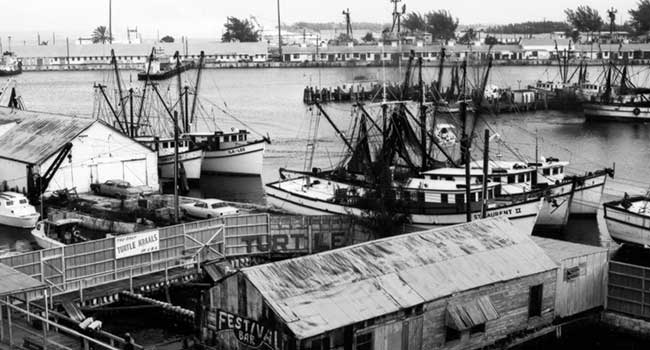 A quick glance in our harbor and you may notice some docked historic ships. These vessels date back to Key West’s early days when the island was only accessible by boat and schooners were used as regular vehicles in their day.

The Schooner Western Union docked at the Historic Seaport is a piece of maritime history. It was built in 1939 and is an all-wood, gaff-rigged vessel. It is the last surviving authentic working tall ship built in Florida. The Historic Seaport is a twenty-acre facility that has become a  major destination for those wishing to experience the old waterfront Key West with a blend of the new. There are historic schooners that visitors can sail on one day and then take a catamaran trip to the reef the next. 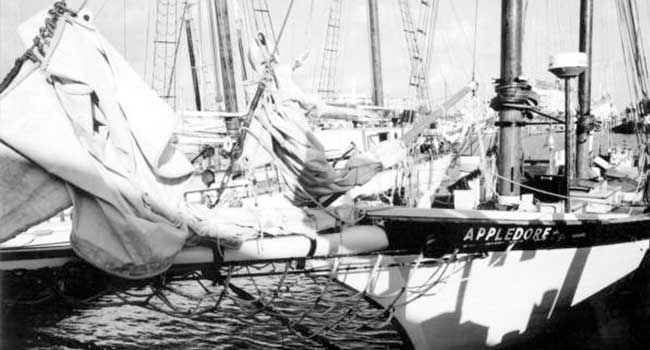 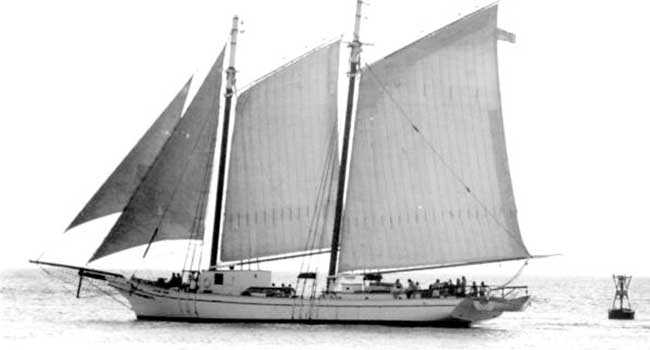 In the mid to late 1800’s Key West was the center for the sea turtle processing and canning industry. Sea Turtle meat, considered a delicacy at that time across Europe and some parts of the United States, was used for soups and steaks, while skins went to leather and the shells were used in jewelry.

Sea turtles were shipped in from the Caribbean and the abundant population of Green Sea turtles in Key West were easily captured, caught and kept in aquatic dockside pens, called crawls or kraals, where they were fed and held until being shipped or butchered at local factories. The Historic Seaport served as a primary location for turtle kraals and canneries throughout the duration of the sea turtle industry. Tourists would flock to the seaport to watch hundreds of turtles being taken off fishing boats.

Tens of thousands of turtles were being consumed each year, which over the course of 100 years decimated the sea turtle population. Catch size regulations were implemented by the Federal Government in the early 1970’s, and by 1973 the Endangered Species Act made it illegal to remove a green turtle of any size from U.S. waters.

As a result, the turtle industry abruptly ended and all turtle canneries subsequently closed. 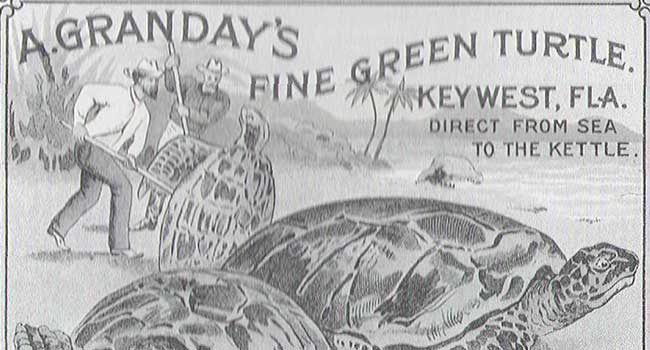 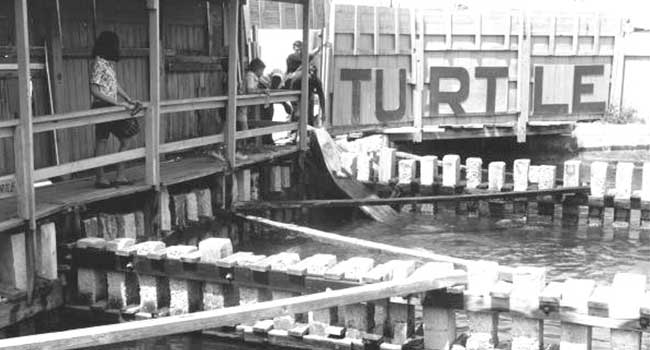 The Sponge Fishing industry began in the 1800’s when native Key West fisherman found sea sponges washed ashore. While initially the sponges were only used locally, they soon became a highly sought after domestic commodity nationally, especially in New York.

For decades, Key West had a monopoly of the sponge trade. Sponge fleets, consisting of small rowing dinghies, traveled off the coast of the Historic Seaport where fishermen used long poles with a 3-4 pronged rake to hook sponges found along the sea floor. The sponges were then cleaned and tied together in bunches for transport to the sponge docks for sale at auction.

At the peak of the sponge trade, there were at least 119 vessels, with 1000 people employed as fishers and shoreside helpers. 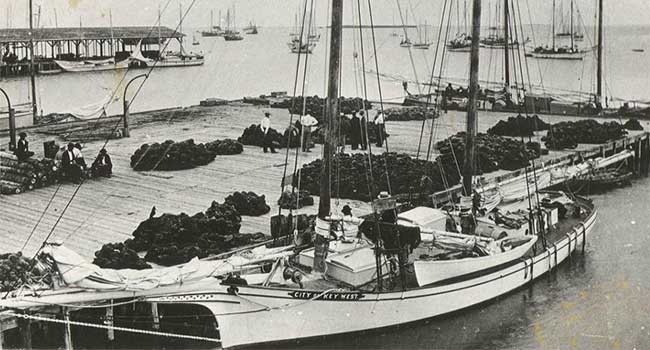 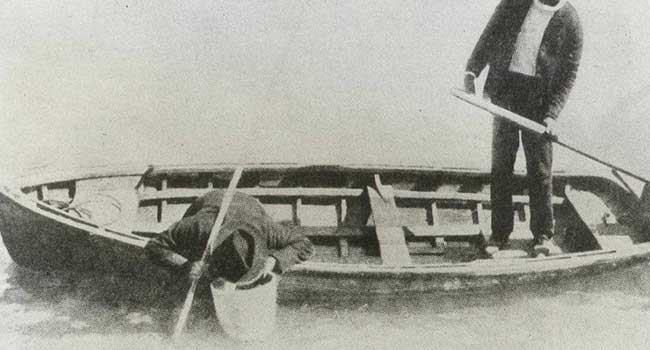 The early settlers in Key West relied on fishing as a means for food as well as economic activity. Many fishers based themselves in the Historic Seaport Bight, as it offered shallow confines for safe anchorage.

When the first permanent inhabitants arrived at Key West in 1822, fishing soon became an important means to provide food and economic activity for the early settlers. It is likely that because the shallow confines of Key West Bight provided a safe anchorage, many of the fishers were based there. The early fishers generally ventured out to nearby coral reefs in small sailing sloops called “smackees” (see photos). Because ice and other means of refrigeration were not yet widely available here in those days, alternative means – “live wells” in the hull – were needed to keep the catch alive in what came to be called the “Key West Market Fishery.” That fishery eventually expanded and modernized to supply much of America’s seafood, but by the late 1980’s, the boats had mostly moved to docks elsewhere in the lower Keys. 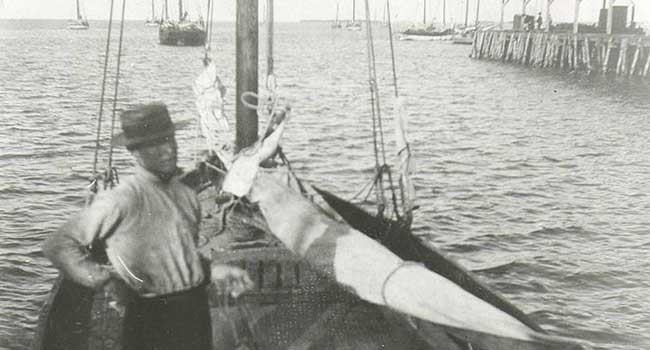 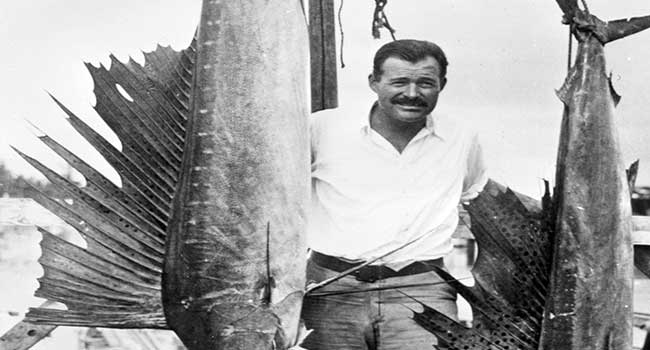 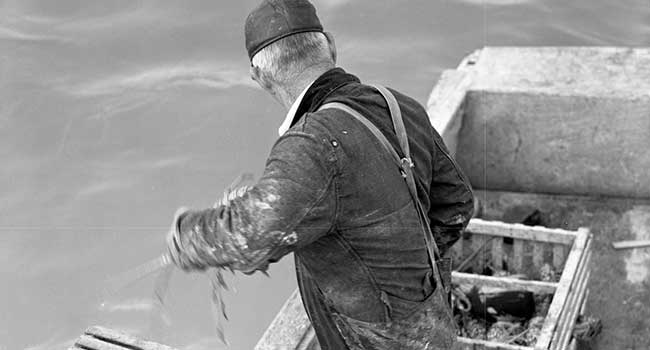 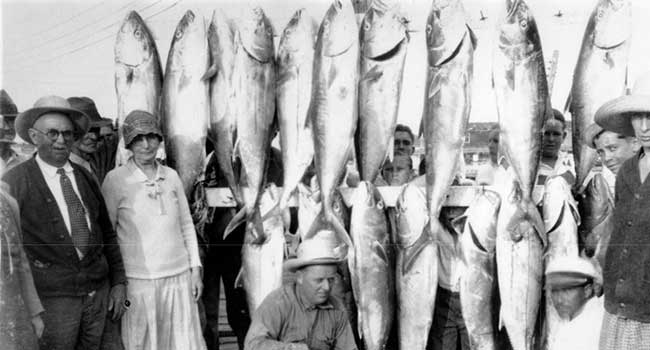 Beginning in 1949 maritime activity increased dramatically when vast beds of Tortugas pink shrimp were discovered in Gulf waters off Key West. Fisherman flocked to Key West’s Historic Seaport with their shrimp trawlers (commercial fishing vessels that pull a fishing net through the water behind it). At this time the Historic Seaport expanded to accommodate the fishery and the handling of the catch.

The fishery of shrimp was a highly lucrative industry as fisherman were able to catch and sell large quantities of shrimp.This period became known as the “Pink Gold Rush”.

Shrimp remained a highly profitable business until the 1980’s when the catch rates began to decline from overfishing. By 1989 the remaining shrimp dealers left the Historic Seaport, ending the shrimping era in Key West. 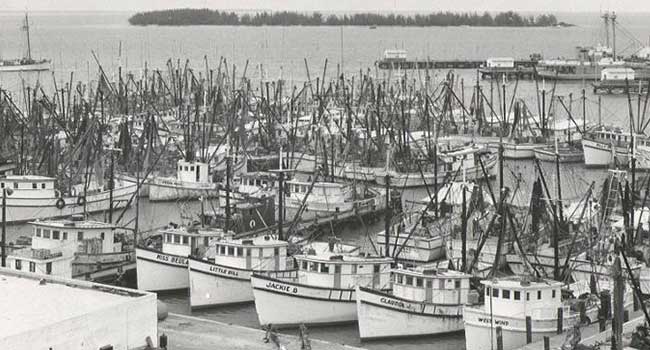 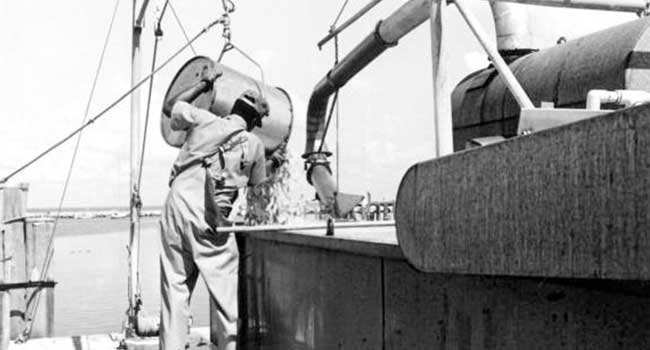