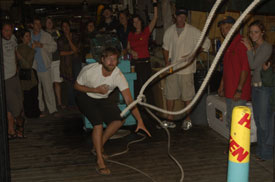 Watch what happens when all four of them combine on the docks at Schooner Wharf Bar, your After Sail Headquarters, Wednesday, January 24th – Friday January 26th at 8:00 pm.

Sailors and any interested challengers will frustrate themselves and entertain the crowd as they race to tie a bowline and lasso a piling. But add a shot of rum and a beer to the contest, and a good time is inevitable.

Entrants stand in front of an ice luge and swallow an icy shot of Mt. Gay that is poured from the top. They then have to tie a bowline and use it to lasso a piling that is on wheels several feet away.  The sailor then pulls the piling to him or her and picks up a cold Kalik beer that is sitting on the base of the piling.

They then drink the Kalik and turn the supposedly empty bottle upside down on their head.  During a week of heated race competition, Knot & Shot is a fun and good-natured race against the clock and other sailors.

Champion, Peter Garrat was given the bragging rights with a time of 00:07:96 last year.

Prizes will be given for the best times, and winners can receive great prizes from Harken yacht equipment, Schooner Wharf Bar gift certificates, and plenty of Mt. Gay Rum & Kalik Beer.

Spectators can enjoy the chance to share stories and drinks with local sailors.  Don’t miss the chance to stroll along the docks and get an up-close peek not only at the classic schooners, but also at the boats in the racing fleets, which will be docked near Schooner Wharf all week.”